Why Porsche Should Have Said Yes.

Think of a game of chicken.

You remember the movie, Rebel Without A Cause, with James Dean? Two “youts” in stolen cars, driving headlong towards each other on a deserted road. The first one to swerve out of the way is the “chicken.”

Seems to be an odd choice of game theory played out in life, but that’s Hollywood.

This all works fine when everyone’s got the same skin in the game. But what if they don’t? What if one guy, for example, is riding a bike? What if the other guy is driving a tank? Asymmetrical games of chicken favor one person over the 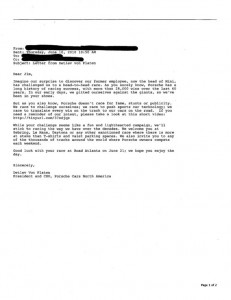 So MINI USA, the “impossibly small” car, challenged Porsche to a road race in Atlanta. And Porsche – in a very articulate way, I must admit – declined. MINI says it’s not over. Porsche doesn’t care.

Why would MINI – whose biggest engine tops out at 172 horsepower – challenge a 620 horsepower Porsche to a road race? Given the likelihood of Porsche fielding a semi-competent driver on a course that favored a faster, more nimble car, it would be likely that Porsche would collect its 28,001st racing victory.

Because in our asymmetrical game of chicken, the MINI driver has a parachute.

If MINI loses, it’s all fun and games. It begs the question, “ah, but by how much?” And, “we’ll get you next time,” If Porsche wins, there is no glory. Of course they were supposed to win.

Of course, what happens – just think it through – if MINI wins?

OK, we understand why a dazzling upstart of a brand like MINI would tweak the nose of the conservative German car that defines high end performance. It’s a no lose situation for MINI. And there’s nothing wrong with having a bit of fun at the expense of your elders (and your former employer, as it turns out!). 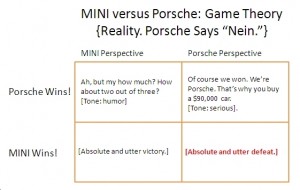 So why would it make sense for Porsche to have said, “Ja. Warum nicht.”

So Porsche could have viewed this as a marketing event, turning what was “fun” a moment ago to MINI into a very serious racing event. 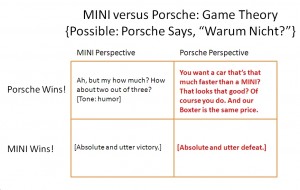 Sure, Porsche should win. The question then becomes, “By how much?”  Once Porsche has resoundingly won the race, it has an excuse to continue the conversation with everyone who currently owns a MINI or is even thinking about it. Did you know the Boxter lists for a little over $47,000? About the same as a MINI Cooper S?

Did you know that MINI sells twice as many cars in the US as Porsche does?

If you could steal someone else’s wallet and spend that money on your own marketing, this wouldn’t be a bad deal for Porsche.

1. Porsche is supposed to say no. MINI is supposed to declare victory in mock surprise and let its vocal community trumpet Porsche’s reluctance. Chicken! This is a great reason to say yes. Because it mobilizes MINI’s community and gives Porsche a built-in audience to sample its absolutely awe-inspiring product.

2. Fight unfairly. Every chance you get. MINI is a marketing miracle. Porsche is a racing icon. By turning the tables on the marketer and making them take the race more seriously than they were planning, it plays to your natural advantages. Turn what was supposed to be a no-lose situation into a showcase for your brand – in front of an audience of potential buyers, no less.

3. Risk has rewards. Calculated bets can pay off handsomely. The tricks – there are 2 big ones here – is to take the race very seriously and fulfill our expectations by winning, and then show how Porsche fits in the lives of the sports enthusiasts within MINI’s culture as a viable next car. Finish well and turn this into the biggest piece of news that Porsche has in the US right now.

One last point. You just have to win. That’s all. By a lot.

14 Responses to “Why Porsche Should Have Said Yes.”