Seeing What Others Miss: Q-TIPS, How to Win a Lost Battle, and 5 Ways to Tactically Shift

If you’re like most people in business, you fall into one of two camps.

You’re either looking for ways to take your business, your brand or just yourself to that next level or you’re wondering how in hell you ended up in this mess and how you’re ever going to get out again.

It doesn’t matter which camp you’re in. You’re looking for a way to get an advantage, to steal a march on the enemy or on fate, and you’re probably looking at the same facts, working the same angles and trying the same tactics as you always have. Or that your opponents are. Either way, you’re stuck.

Good news for you.

My friend and colleague, Dr. Steven Feinberg, and I just penned an article in The Conference Board Review that you need to read. You also need to visit our site at DecisionTriggers.com and download the 5 Shifts Checklist, print it out, and tape it to the wall right over your computer. 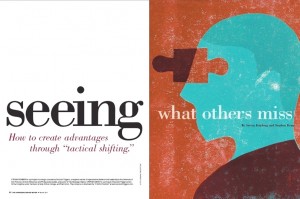 We’re lazy. Not you, specifically. Just us. We. We’re creatures of habit. We do things a certain way and that certain way creates boundaries around our actions, what we allow ourselves to perceive and the evidence we allow into our psychological courts. Outliers simply become invisible – until we acknowledge our biases.

And then, the magic happens. Once we give a name and a face to these invisible forces, they appear, and with them appear options and alternatives that were hidden in plain sight a moment ago.

Here are five shifts you can take to break your mental adhesions and see what was hidden in plain sight just a moment ago.

When Jack Nicklaus designed the Brittania Golf Club in the Cayman Islands, he had a problem. The island was too small. Golfers kept crunching their shots out into the deep blue. So what did he do? He didn’t have the option of making the island bigger. He deconstructed the problem. It wasn’t the island that was too small, it was that the golf balls were going too far. So he redesigned a golf ball that wouldn’t fly as far.

What are your givens? What do you think is gospel truth? Now, throw that out. What if you’re wrong? What options have just opened up for you?

I spoke with someone at Adobe not long ago who told me about how she ambushed a competitor on a Black Friday ad by sending detailers into the retail stores, intercepting shoppers between the time they arrived at the store, circulars in hand, and the time they bought something. That sliver of time was ignored by their competitor – and it created a victory where before there was only a one-sided win for the other team.

How can we turn a marathon into a sprint – or a sprint into a marathon? How can you find time where your opponent thinks the game is over? How can you end the game early and wrap up a win when the other guy is still warming up?

Ever done a 360 degree review? I have and it was extraordinarily empowering. I picked three or four people who were internal political adversaries – people instructed by their management to obstruct everything I was given the mandate to accomplish. I asked them what I was doing right, what I was doing wrong, and what I wasn’t doing that I should. No being defensive, just collecting feedback in a dispassionate way. It was completely disarming. Their planned mode of interacting fell apart when I shifted to a “one-down” position.

How we choose to interact – as a peer, a subordinate or a superior, or by mirroring or contrasting my actions and words – determines whether we continue along the same path or break our adhesions and change our ways. Change your interactions and you change how the other person receives your message.

Feinberg tells a great story in his book of a besieged castle catapulting its last cow over the walls stuffed with the last of its grain into enemy lines, an act causing the besiegers to withdraw due to the perception that the castle had so much food that they were laughing at their enemies!

How do you “declare the debate to be over”? How do you create the appearance of success so that it becomes success? Perceptions may or may not be reality, but they can become reality if we get people seeing things our way.

Sony didn’t create the iPod or iTunes because it was a product of linear recording technology, of tape, and of a captive music label. These two forces precluded it from thinking that MP3, solid state anything, or working across labels would ever be smart moves.

We’re surrounded by the structures of modern life. And there’s an advantage to those who can change their psychological focal length and recognize these structures for what they are. Recognize that most companies are still operating under the structures that guided their evolution. We all walk around with computers in our pockets now more powerful that the ones on our desktops when we were in school. Bandwidth is unlimited, storage is free and video is cheap. What does all this mean to your brand today, right now?

Go read the whole thing. Or download it in PDF format.

Big news next week, by the way, so stay tuned!

3 Responses to “Seeing What Others Miss: Q-TIPS, How to Win a Lost Battle, and 5 Ways to Tactically Shift”