Note to CMO: Snakes On A Plane Branding 2 — The Display!

I recall a thought-provoking paper written by a head of marketing some years ago describing the state of the art in the science of retail. The writer described how in order to drive increased revenue per consumer they were studying consumer foot traffic patterns as they moved through the store. They did this with a multi-million dollar sensor array in the ceiling. The retail chain was, I believe, Kmart, who then went into Chapter 11 and merged with Sears.

Sometimes answers are simple. There is plenty out there to read describing experiential marketing and how consumers are increasingly demanding to try before they buy — free downloads, samples, a deeper brand experience, etc., etc. I get it and I believe it. Want to see what I mean? 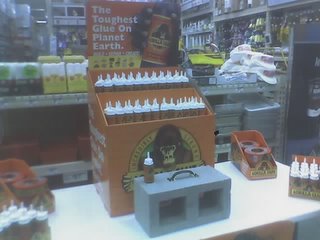 Take a look at this display — I just saw it in my local Home Depot. The brand is Gorilla Glue (we should start giving our “SoaP Horsetrailer Awards” like John Madden used to do on Monday Night Football. I nominate Gorilla Glue for the first “SoaPie”). I don’t know who was responsible for this, the store manager or a detailer, but nothing sells the story that this glue is the Toughest Glue on Planet Earth ™ like gluing a handle to a cinderblock and letting the customer pick it up for themself.

Did I buy a quarter pallet of Gorilla Glue? No, not today. But make no mistake, when I’m in the market for the “TGoPE”, I know what I’m going to buy. This display, without any drama, mutely tells you everything you need to know: you can pick up a cinderblock with two globs of this stuff. Enough said.

You think the guys who launched Infiniti (“sales of the new cars are flat, but rocks and trees are up 30%”) could have benefited a bit from the wisdom at Team Gorilla Glue? Samuel L would have given the agency a biblical creative redirection.

It’s easy to be too clever by half. Maybe we should trust our consumers to make up their own minds. If they can experience it — touch it, feel it, and really get the whole point, right there in the store or on the site — they will be smart enough to make the right decision. If they aren’t interested, they aren’t your customer. If they are, they will tell friends and neighbors things like, “you can pick up a cinderblock with just two globs, for crissakes!” And you can’t fake ad copy like that.

One Response to “Note to CMO: Snakes On A Plane Branding 2 — The Display!”