Killing Giants: 10 Strategies to Topple the Goliath In Your Industry 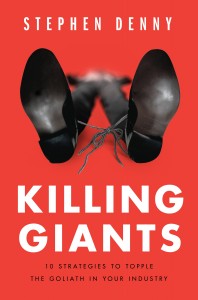 You compete against Goliath.

A competitor with more people and money and resources than you can ever hope to match. A household name. They have more people in R&D than you have in your whole company and they spend more on off-site meetings than you do on marketing. Where they seem to have no limits, you have constraints.

Your best work comes from constraints like these. And frankly, although it feels counterintuitive right now as you stare straight up at the mountain-sized problems that confront you, it’s never the giants that control their own destinies.

It’s the insurgents, the Giant Killers, that really hold all the cards. Giant Killers are the ones who can launch surprise attacks, pick unfair fights and hijack the conversation, stealing the customers right out from under the giant’s nose.

For those who have followed what I’ve written here at StephenDenny.com for a while (and Note to CMO before that), I’m happy to announce that my book, Killing Giants: 10 Strategies to Topple the Goliath In Your Industry (Portfolio US and Penguin UK) is less than T-Minus 90 days to launch. This has been four years of thinking and two years of research and writing. I interviewed over 70 of some of the world’s most effective business, from Silicon Valley to the townships of South Africa, and distilled 33 brand stories down into 10 concrete strategies that you can apply right now, today, to your business.

Killing Giants tells the stories that have defined emerging and iconic brands, from Go Daddy’s Bob Parsons telling us the thinking that led to his first Super Bowl ad in 2004 and Baidu’s Robin Li explaining to me how “picking a fight he knew he could win” was the right thing to do all the way to how Brazil’s Oi Mobile levered open its local mobile phone market and hearing how Intuit uses a culture of “ending the internal debate” to win faster.

I’ve also gone outside typical business circles to animate these strategies. Boxing historian and raconteur Burt Sugar, he of the cigar and fedora seen on HBO Boxing, told me how Joe Louis barely escaped upstart light-heavyweight Billy Conn at the Polo Grounds in July of 1941, giving new insight into winning in the last three feet and the importance of finishing well. Hostage negotiator Victor Bazan recounted the chaos of the St. Martinsville Parish prison riot in 1998, a vivid illustration of how to flip the “emotional polarity” of a situation. Screenwriter, author and writer Robert McKee lent his voice to the choices we make under pressure that define characters, the Red Bull Formula 1 Racing Team’s #2 mechanic, Ole Schack, described for me how a world class team is built on the basis of speed and Dr. Conrad Crane, author of the US Army/Marine Corps Counterinsurgency Manual and professor at the US Army War College, gave me an insider’s look at Mao’s theory of protracted war.

You can pre-order Killing Giants through the links up in this site’s header – publication date for the US and all English-speaking markets is March 31, 2011.

Sign up for the newsletter to get the full verbatim interview notes from my research and stay tuned for more on the book’s launch.

One Response to “Killing Giants: 10 Strategies to Topple the Goliath In Your Industry”