5 Rules for Managing Superstars (and Their Egos) 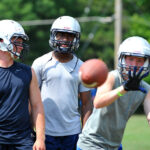 Sometimes, everything comes down to that one player on the team to take the shot, close the sale, or design a product the way no one else can. Superstars transcend the normal distribution curve of contributors on your team with natural talents others can’t bring to the table. Your business can’t live without them. The problem is that sometimes, you can’t live with them, either.

Working with extremely high-performing and equally difficult people is a balancing act I’ve seen as a marketing (and sometimes sales) executive over many years in many companies. High performers often have egos to match. Sometimes, even worse, they understand their personal leverage and find great personal fulfillment by insuring everyone else understands it as well. The challenges of a business owner in managing a high-performing employee is to know when to act and when not to, which forces us to confront not only their ego, but also our own.

Your high performer might not think they have a peer in your company–and they might be right. If so, find a model for them to live up to, even if it’s far afield. Think of how former Cleveland Cavaliers coach Ty Lue describes coaching Lebron James. “I just tell them LeBron’s easy (to coach),” he has said in interviews. “LeBron is easy to play with, very unselfish. LeBron can bring guys along, make sure they’re doing the right thing.”

If LeBron isn’t a prima donna to coach, does your sales guy really think he should be?

2. Project the bigger picture for them.

High performers hate power vacuums, in my experience. They most often respect clarity from their leadership, albeit with a light hand. The insight here is high performers need to see the vision, the higher goal, so they don’t become focused by default on their ego-driven one. Legendary Chicago Bulls Head Coach Phil Jackson is known for saying, “Good teams become great ones when the members trust each other enough to surrender the ‘me’ for the ‘we.'”

3. Give them a forum to contribute.

High performers, more so than most others, need to know their expertise is acknowledged and their contributions known. So make sure they know they’re listened to and they understand even if they don’t get their way, they will have a unique way to contribute. Mike Cassidy, former founder of early internet search engine Direct Hit, said in an interview I conducted with him that appears in my book Killing Giants: “When I start a company, the first thing I do is bring everyone into a room and let everyone say, ‘Mike, that’s the worst idea I’ve ever heard in my life and here’s why…’ But then, when we make a decision, I want them to say that five minutes ago they hated the idea but now they see a way to make it better. There’s no room on a high performing team for ‘I told you so.'”

Don’t forget what makes your stars the stars they are. Let them do what they do best and try to eliminate the extraneous, bureaucratic bits. Does your super sales guy complain about spending hours on manually inputting details into CRM? How can this best be off-loaded or eliminated? It’s also worth noting that If it’s wearing on them, it’s wearing on everybody else, too.

Beating the competition is a powerful motivator, but nothing spurs high performers more than internal competition. How can you find a way to remind your top performer there’s someone down the hall–or in the next building–who is right on their heels or even a few steps ahead? Ole Schack, the front-end mechanic for the Formula 1 Red Bull Racing Team, provided a great example of creating a positive competitive tension within a high performing team when I interviewed him several years ago. If you’ve ever wondered how 22 people can change four tires in 1.9 seconds, there’s a lot of skill-based selection and training–but the competitive side is equally important. It’s gratifying, Ole says, to be fast. But within the team, there are bragging rights to which three-person team handling a particular “corner,” or wheel, is the fastest.

Above all, there’s a last measure to be taken when managing a high performer–or a high-performing team–where egos and capabilities are equally beyond normal contributors. As a leader, you must make sure it’s not your ego, your personal desire to control everyone, that’s holding everyone back.

As coach Jackson reminds us, “Leadership is not about forcing your will on others. It’s about mastering the art of letting go.”